Set in Toronto at the dawn of the 20th century, Murdoch Mysteries is a one-hour drama series that explores the intriguing world of William Murdoch (Yannick Bisson), a methodical and dashing detective who pioneers innovative forensic techniques to solve some of the city’s most gruesome murders. As season twelve of the top-rated, internationally acclaimed series begins, Detective Murdoch (Bisson) and his wife Dr. Julia Ogden (Hèléne Joy) have reconciled after a miscarriage and built their dream home, designed by renowned modernist architect Frank Lloyd Wright (Aaron Poole).

Ogden enlists Murdoch to investigate possible sabotage in the operating room after a patient dies during a routine medical procedure.

When Murdoch, Ogden, Crabtree and Brackenreid attend Higgins’ and Ruth Newsome’s wedding, a guest repeatedly tries to kill the groom.

After anti-immigrant laws lead to the arrests of Greek men, Brackenreid regrets releasing his carpenter when he’s suspected of murder.

When Murdoch impersonates a dead diplomat to save a treaty, but political and sexual intrigue complicate matters.

Murdoch investigates an astronomical phenomenon with a strange impact on his colleagues’ behavior and dire implications for Toronto.

When Watts kills a man in self-defense and Murdoch uncovers the victim’s criminal past, questions surround Watts’ story.

When a wealthy, high society couple is found drowned in their pool in an apparent double suicide, Murdoch suspects murder.

When Brackenreid leaves Toronto to help an old friend find a missing woman, he learns he’s a lot closer to the case than he thought.

As Murdoch helps an Italian detective recover a shipload of stolen antiquities, Brackenreid considers shipping out.

Crabtree and John are transporting a convicted axe murderer to prison when she escapes to exact revenge on those who testified against her.

Murdoch’s distressing childhood memories are evoked while investigating the death of an orphan under the care of the same Jesuit priest who taught him.

Murdoch enlists inventor Nikola Tesla to help with the murder investigation of a man experimenting with invisibility.

When a man dies in a deliberately set fire, Murdoch’s investigation reveals some shocking personal history.

When a man is electrocuted during a typing contest with Crabtree and Louise Cherry, Murdoch suspects the reporter was the intended target.

After the release of Murdoch and Ogden’s book, a series of copycat murders begin to take place.

As Murdoch seeks a promotion, a constable is shot in a botched raid on an opium den led by Watts.

Murdoch suspects John is being framed for murder by Inspector McWorthy and Brackenreid goes after the corrupt copper. 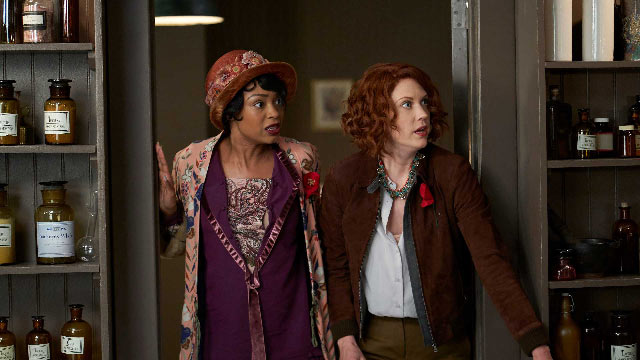 Frankie Drake Mysteries is set in stylish 1920s Toronto and follows the female-only agency Drake Private Detectives, led by the eponymous Frankie Drake (Lauren Lee Smith) and her partner Trudy Clarke (Chantel Riley). Incorporating a brand of justice that doesn’t always follow the law, Frankie and Trudy investigate mysteries and crimes that either the police refuse to take on, or that their clients cannot take to the police at all.

Frankie partners with a surprising ally when she’s named as the number one suspect in a robbery that looks like the work of her dead father. Guest starring Wendy Crewson (Saving Hope, Slasher, Revenge), Steve Lund (Reign, Bitten) and Derek McGrath (Doc, Little Mosque on the Prairie).

Frankie and Trudy are hired by a factory owner to root out communists at his plant, but things soon take an explosive turn. Guest starring Karen Robinson (Schitt’s Creek, Lars and the Real Girl) and Paul Amos (Lost Girl, Murdoch Mysteries).

Frankie and Trudy go undercover in the glamorous world of film in order to solve a seemingly impossible murder on a silent movie set. Guest starring Laura Vandervoort (Bitten, Smallville).

After a shooting injures the young son of a friend, Frankie and Trudy’s investigation leads them into the dangerous world of bootlegging. Guest starring William Melling (Harry Potter films) and Grace Lynn Kung (The Carmilla Movie, Star Trek: Discovery).

A day off turns into a day at the office for Frankie and Trudy when the infant son of a charismatic aviator is kidnapped during an air show. Guest starring Emmanuel Kabongo (21 Thunder, Teenagers), Laurence Fox (Inspector Lewis), Charlotte Sullivan (Chicago Fire, Rookie Blue), Lucas Bryant (Haven, Shoot the Messsenger) and Kris Holden-Ried (Vikings, Lost Girl).

The horrors of war haunt Frankie when an investigation into a soldier’s murder reunites her with a friend left traumatized by his tour of duty. Guest starring Kris Holden-Ried (Vikings, Lost Girl).

Frankie is hired to confirm the identity of a young woman claiming to be a Russian princess and protect her from those who want her dead. Guest starring Steve Lund (Reign, Bitten), Jodelle Ferland (Dark Matter), Wendy Crewson (Saving Hope, Slasher, Revenge) and Sebastian Pigott (Being Erica, Slasher: Guilty Party).

All episodes will be also be available on demand and the Ovation NOW App.

THE DOCTOR IS IN! OVATION TV TO AIR THE DOCTOR BLAKE MYSTERIES STARTING ON JULY 7