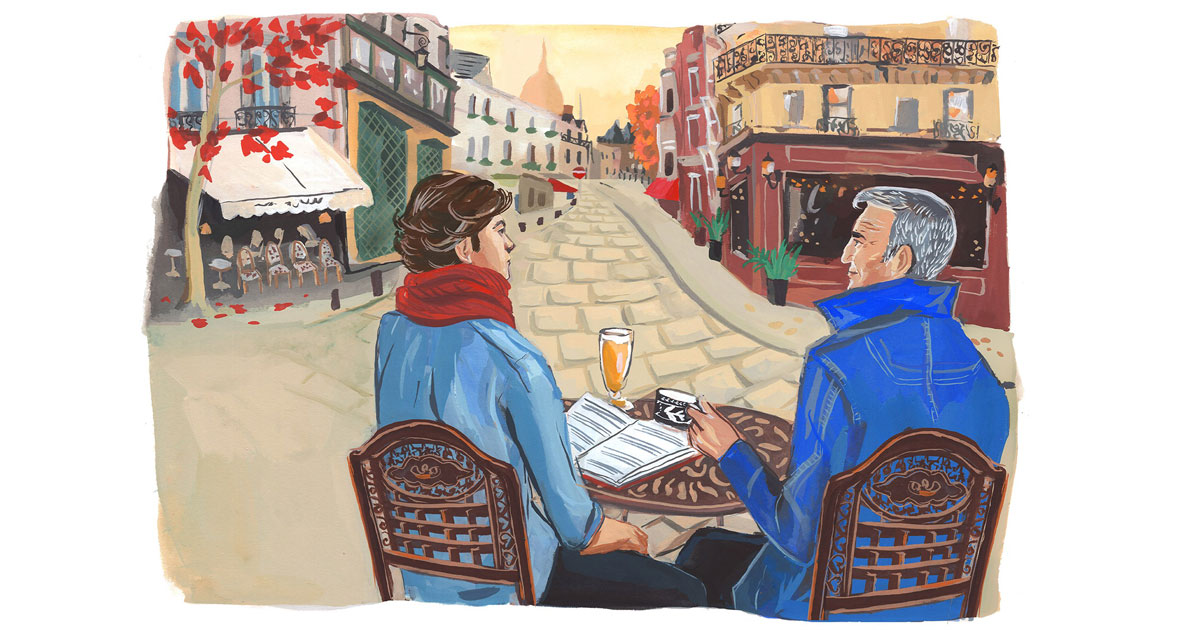 Before Sunset. Elio and Michel share an evening at a café. ILLUSTRATIONS BY JENNY KROIK.

Fans of the 2017 film Call Me By Your Name starring Timothée Chalamet, Armie Hammer, Michael Stuhlbarg, and Amira Casar (who played Béatrice in the Ovation series Versailles) should be excited. A sequel to Elio and Oliver’s story is here! After the success of the film, author André Aciman set to work writing a sequel to his 2007 novel on which the film was based.

Find Me does not disappoint: Aciman has recaptured the magic of his debut novel. Starting ten years after the events of Call Me By Your Name, the reader is instantly transported to the world of Elio, Oliver, and Elio’s father Sami. Elio is now a classical pianist living in Rome, while Oliver is a college professor of classics in New England. Sami, also a professor of classics, heads to Rome to conduct a lecture on the Fall of Constantinople, setting off the events of this novel.

Aciman’s prose is beautiful, full of descriptions that make you feel as though you were right there in the centers of Rome and Paris. He captures the feelings of longing, romance, despair, and passion. Not only is the novel a work of art, but it teems with references to music, paintings, literature, architecture, and poetry. Elio plays Mozart’s E-flat Major and D Minor concerti and, later, meets an older man named Michel at a concert. Sami frequently quotes the German poet Goethe after meeting Miranda, a photographer. Oliver’s professorship focuses on the language, literature, philosophy, history, and archaeology of the Greco-Roman world.

Even the structure of the novel lends itself to art: the story is divided into four parts, each named with a musical term (“Tempo,” “Cadenza,” “Capriccio” and “Da Capo”). Tempo sets the pace of the novel, starting with Sami; cadenza provides a look into Elio’s life without Oliver; capriccio provides a lively night for Oliver in America; and da capo returns to the beginning of Elio and Oliver’s love story.

Find Me expands on the events of that hot Italian summer in the 1980s that we grew to love in Call Me By Your Name and adds time and maturity to its characters. Readers may be surprised to see where Elio, Oliver, and Sami end up two decades later, but Aciman loves these characters as if they were real people and treats them with dignity and the respect they deserve. You will, too.

Find Me by André Aciman is available Oct. 29.