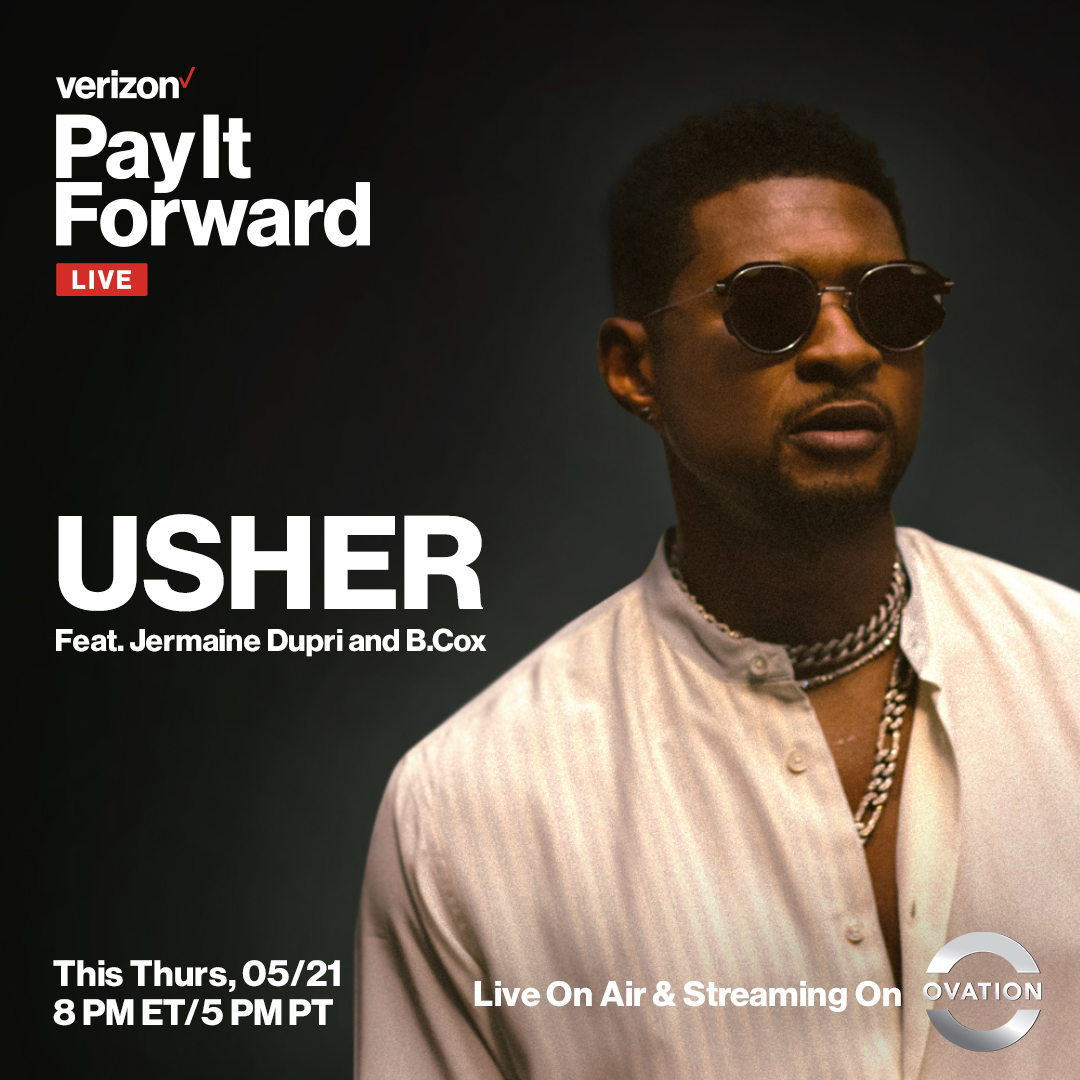 Catch it Commercial-Free on Ovation TV, OvationTV.com/watch and the Ovation NOW App

Verizon’s Pay It Forward Live continues with performance from Usher
featuring Jermaine Dupri and B.Cox on Thursday, May 21

WHAT: Usher, joined by Jermaine Dupri and B.Cox, will perform on Pay It Forward Live, Verizon’s weekly streaming entertainment series in support of small businesses affected by COVID-19, on Thursday, May 21.

“I’m proud to join Verizon’s efforts to rally around small businesses across the country,” said Usher.” “I hope to bring further attention to the importance of supporting small businesses by taking part in a public service announcement and an upcoming performance on Pay It Forward Live. I’m looking forward to performing and reminding people how important it is to support small businesses and the people who work so hard to make them possible.”

Over the course of Pay It Forward Live, viewers are encouraged to do what they can to support local businesses in their own communities by shopping online, buying a gift card to be used when businesses reopen or ordering a meal. More information can be found at Verizon.com/PayItForwardLive.

WHO: Challenging himself creatively and testing musical boundaries are characteristics that have defined Usher’s career since he was first discovered twenty years ago on Star Search.  Usher has been ranked by the Recording Industry Assn. of America as one of the best-selling artists in American music history, having sold over 65 million albums worldwide. He has won numerous awards including  8 Grammy Awards and was named the #1 Hot 100 artist of the 2000s decade. Billboard named him the second most successful artist of the 2000s decade, with his career-propelling 2004 album “Confessions” being ranked as the top solo album of the 2000s decade. Usher has attained nine Hot 100 #1 hits (all as a lead artist) and 18 Hot 100 top-10 singles. Realizing that with success comes responsibility. Usher has also proven to be a major philanthropic force. Founded in 1999, his New Look Foundation empowers youth from impoverished communities to become leaders. In recognition of his accomplishments, Usher has been honored by the Boys & Girls Clubs of America, the Trumpet Foundation, Do Something, the NAACP, and as the 2010 Ford Freedom Award Scholar.

WHERE TO WATCH AND LISTEN: Viewers can watch the performance live at 8:00 p.m. ET/5:00 p.m. PT on Twitter @Verizon, Yahoo, Verizon’s Facebook and YouTube pages, Fios channel 501 and 604, Yahoo Finance on Samsung TV Plus on channel 1017, The Roku Channel, AXS TV, FOX NOW and Ovation TV or listen on iHeart and SiriusXM. The event will be available on Verizon’s platforms for one week following the live stream.