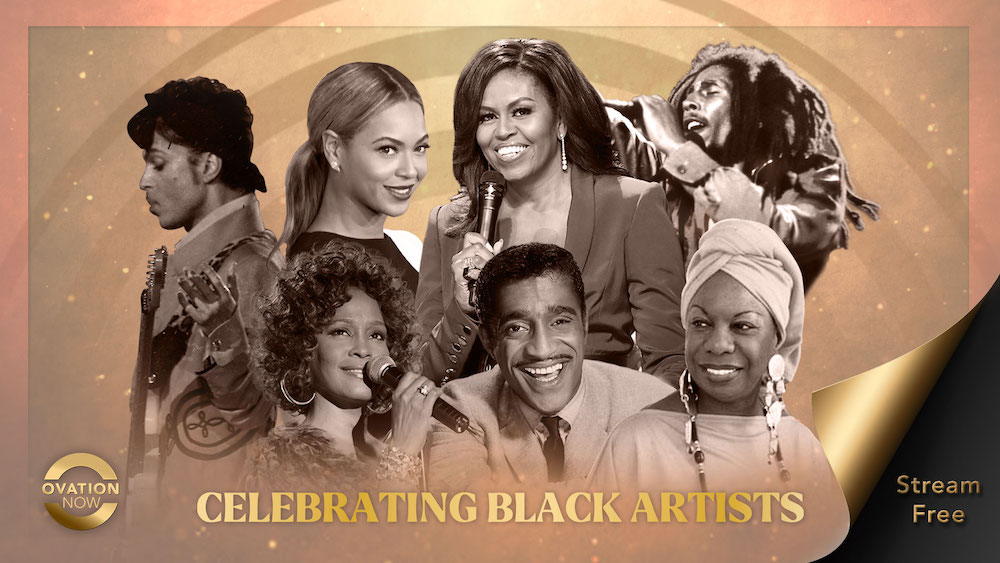 Los Angeles, CA: Ovation TV, America’s only arts network, celebrates diversity in the arts through both its programming and its advocacy platform Stand for The Arts, a national initiative to raise awareness, protect access and encourage action on behalf of the arts. For 2021’s Black History Month, the arts network recognizes Black artists and artistry across all mediums through a curated on-demand programming lineup and public service announcements.

The Stand For The Arts public service announcements honor local artists who enrich our lives through the power of art, such as Genesis Tramaine, a self-proclaimed urban evangelist painter, and LeRone Wilson, an artist who specializes in beeswax art. One PSA focuses on 2019’s Miss America Nia Imani Franklin, an accomplished composer and classically trained opera singer who leads master classes for music composition and operatic students. Another PSA highlights a variety of Stand For The Arts coalition members from across the nation including Nashville Ballet, St. Louis Jazz, and Streetlights (Los Angeles), showcasing the importance of diversity in the arts and entertainment.

The arts network also highlights Black artists who have made a significant impact on the national and international stage, with documentary films and series exploring their careers and craft. One film, Nina Simone, The Legend, captures an up-close and personal portrait of the famous singer through interviews and footage with friends, family, and Simone herself. Jean-Michel Basquiat, from documentary filmmaker Jean-Michel Vecchiet, features interviews with friends, collaborators, and gallery owners who supported the neo-expressionist painter in the 80s.

In his interview series Celebrity Conversations, film critic David Poland sits down with the biggest names in entertainment – like Samuel L. Jackson and Keegan-Michael Key – for in-depth conversations about their art, craft, and life. Full episodes of Inside the Actors Studio are also available, featuring the classic James Lipton interviews of Will Smith and Halle Berry, as well as the latest Ovation-produced episodes with David Oyelowo and Alfre Woodard.

Bob Marley: Roots of the Man

Hamilton: One Shot to Broadway

My Years as Louis Armstrong

Sammy Davis Jr – The Very Best of the Rat Pack

Whitney Houston: We Will Always Love You

Inside the Actors Studio: The legendary interview series that examines the craft and careers of hundreds of actors. Featuring Will Smith; Halle Berry; David Oyelowo; Alfre Woodard; and Lupita Nyong’o.

The Sound of New York: This series dives into the next generation of internationally renowned artists who call the city home. Each one has a different story, having taken their own route to get to New York. Now, on the back of decades of musical integration and alchemy, they look forward, carving out the sounds of tomorrow. Featuring Bilal; Greg Osby; Theo Croker; Gerald Clayton; Mark Turner; Damion Reid; Stefon Harris; Vicente Archer; Luis Perdomo & Mimi Jones.

The Art Of: Explores creative fields that fall outside the traditional definition of “art.” Each week, a new artistic medium is explored through profiles of boundary-pushing artists. Featuring episodes on Music, Fashion, Sneakers, Hair, Pop Ups, and Hip Hop.

Black History Month began in 1926 as a weeklong celebration of the achievements of African Americans. Historian Carter G. Woodson and the Association for the Study of Negro Life and History (ASNLH) chose the second week of February to celebrate “Negro History Week” to coincide with the birthdays of former president Abraham Lincoln and activist Frederick Douglass.