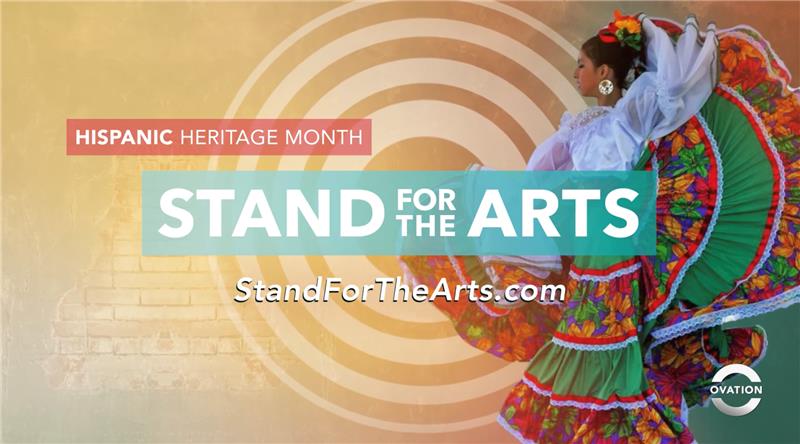 Los Angeles, CA – Ovation TV, America’s only arts network, is set to celebrate National Hispanic Heritage Month (September 15 to October 15) with on-air public service announcements and a free, specially curated section of programming on the Ovation NOW app. The network’s national advocacy platform Stand For The Arts (SFTA) aims to ensure that the arts remain a vital part of our society and to reinforce the inherent value that the arts, and the creative economy, provide on a national level. Under the SFTA banner, Ovation will feature public service announcements on-air and on social media highlighting Hispanic artists and organizations across the country such as the National Hispanic Foundation for the Arts and Ballet Hispánico.

The National Hispanic Foundation for the Arts strives to advance the presence of Latinos in the media, telecommunications, and entertainment industries. The Foundation has concentrated on increasing access for Hispanic artists and professionals while fostering the emergence of new Hispanic talent. Since 1997, the Foundation has provided scholarships, outreach, and adjunct programs to more than 500 Hispanic students pursuing graduate degrees in the arts in excess of $5 million dollars.

For fifty years, Ballet Hispánico has been the leading voice intersecting artistic excellence and advocacy and is now the largest Latinx cultural organization in the United States and one of America’s cultural treasures. Ballet Hispánico brings communities together to celebrate and explore Latino cultures through innovative dance productions, transformative dance training, and enduring community engagement experiences.

“Ovation honors those Hispanic and Latin Americans who have contributed significantly to the arts community and to greater society – whether it be music, acting, painting, outreach, or activism,” said Charles Segars, CEO of Ovation TV and Founder of Stand For The Arts. “We recognize the great work being done by the National Hispanic Foundation for the Arts and Ballet Hispánico to advance and celebrate Latinx artists across the U.S., and we celebrate the great artistic achievements of the Hispanic community at large.”

“We’re beyond pleased to have Stand For The Arts create a public service announcement (PSA) highlighting all the great work we do for Latino artists and young professionals,” stated Felix Sanchez, Chair and co-founder, National Hispanic Foundation for the Arts. “We’re grateful to Ovation TV for running the PSA on-air during National Hispanic Heritage Month.”

“Ballet Hispánico is deeply honored to be featured in a public service announcement created by Stand For the Arts in recognition of National Hispanic Heritage Month,” added Ballet Hispánico Artistic Director & CEO, Eduardo Vilaro. “Ovation TV’s efforts align with our mission to give agency to Latinx artists and dance, and we are overjoyed by this partnership.”

Honoring its mission of celebrating and presenting all forms of art, Ovation will highlight artistic excellence in the Hispanic community with profiles and interviews featuring some of the biggest artists in the world: Jennifer Lopez, Benicio del Toro, Demi Lovato, Salma Hayek, and more. This special folder will be available, free to all, on the Ovation NOW app and on the “Watch” webpage of Ovation’s website.

In celebration of Hispanic and Latin American art, the following titles will be available starting September 15:

Bruno Mars: Just the Way I Am
Bruno Mars has soared to fame from struggling songwriter to international superstar. Having performed at the 2014 Super Bowl halftime show alongside the Red Hot Chili Peppers, Mars cemented his status as a global icon. Now, with over 45 million singles sold worldwide and over one billion views on YouTube, Bruno Mars is going from strength to strength. This is Bruno Mars and his fascinating story.

Hamilton: One Shot to Broadway (2016)
A story of how a group of mavericks made an unlikely marriage of hip-hop and history to create the biggest show in America. Featuring interviews with Lin-Manuel Miranda, as well as the cast and crew of Hamilton.

Inside the Actors Studio
The legendary interview series that examines the craft and careers of hundreds of actors. Featuring Jennifer Lopez (1 episode).

Lost Kingdom of South America
Dr. Jago Cooper reveals the history of some of South America’s ancient civilizations, including the Chachapoyas, Tiwanaku, and El Dorado (4 episodes).

The Art Of: Tequila
This Ovation original production looks at the festive spirit of tequila. Casa Mexico Tequila brings viewers through the process of tequila making, from harvesting to bottling. Features Mario Lopez.

About OVATION TV America’s Only Arts Network
As an independent television, production, and digital media company, OVATION TV has an unparalleled commitment to the arts, culture, and captivating entertainment.  Showcasing a lineup of critically-acclaimed premium dramas, specials, documentaries, and iconic films, OVATION TV salutes innovative storytelling with popular programming that includes Inside the Actors Studio, Murdoch Mysteries, Riviera, Frankie Drake Mysteries, Miss Fisher’s Murder Mysteries, The Fall, Luther, Midsomer Murders, Landscape Artist of the Year, Grand Designs, Amazing Hotels, Chasing the Sun, and Anthony Bourdain: No Reservations. Ovation also powers JOURNY, the dedicated streaming service where art, culture, and travel intersect.  The company has provided more than $15M in contributions and in-kind support to arts institutions and arts education.  Its signature advocacy platform, STAND FOR THE ARTS, includes a coalition of over 130 arts organizations, cultural institutions, and arts leaders throughout the country raising awareness about art’s positive impact, protecting access for everyone, and encouraging action on behalf of the arts.  OVATION TV is available on major providers via cable, satellite, and telco systems including Comcast Cable/Xfinity, DIRECTV, AT&T TV, SPECTRUM, Verizon FiOS, as well as on demand.  You can follow OVATION TV on Facebook, Twitter, YouTube, Instagram, OvationTV.com, and through our App, OVATION NOW.