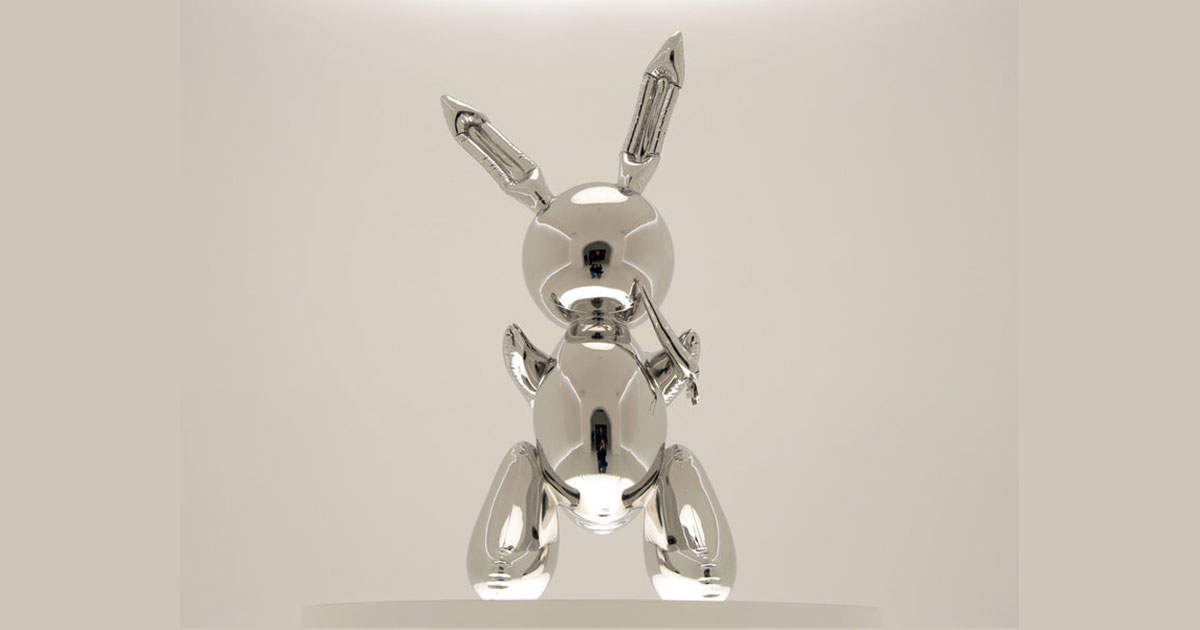 Rabbit by Jeff Koons was sold for more than $91 million at Christie’s in New York.

Our staff compiles the most compelling art news of the year:

“Teeter-Totter-Wall” at the U.S.-Mexico border

For a brief 40 minutes of joy, pink see-saws were placed along the U.S.-Mexico border, where children were seen bouncing up and down. For a short-lived moment, the installation demonstrated the border as a place of playfulness instead of conflict and violence.

In November, the Marciano Art Foundation laid off 60 of their visitor services associates who had announced days earlier that they intended to form a union. Days after the layoff, the arts organization, established by Guess founders Paul and Maurice Marciano in 2017, announced that they were closing their exhibition space indefinitely. Since then, the foundation has released a statement that the closure is permanent. It has also scrapped its online presence, its website, Twitter and Instagram accounts disappearing and begging the question, what was it all for?

Text-based conceptual artist Jenny Holzer illuminated some of Rockefeller Center’s most notable buildings with powerful words addressing our nation’s gun violence issue. Selected poems by teens who have witnessed and been affected by mass shootings were projected on high rises each evening from October 10-12. Through “VIGIL,” Holzer seeks to remember the lives we’ve lost while providing space to contemplate our nation’s future.

“Christ Mocked,” one of eight scenes depicting Christ’s passion and crucifixion painted by Cimabue in 1280.

Near the northern French town of Compiègne, a woman in her 90s learns that a piece she had displayed in her kitchen is actually a masterpiece! Only when she decided to sell her home did an appraiser find out that the painting is indeed by the Florentine painter Cimabue of the early Renaissance.

This majestic sculpture was erected in the middle of Hudson Yards in Manhattan, the largest private real estate development in the United States by area. You can’t miss this spiral staircase comprised of 154 intricately interconnecting flights of stairs — almost 2,500 individual steps and 80 landings!

“The Flower” on Masked Singer

Classic American music collided with reality television when “The Flower” was revealed to be none other than Patti Labelle. We hope that more timeless artists join the cast of one of today’s most-watched competition series.

The Museum of Contemporary Art Chicago opened “Figures of Speech,” a special exhibition showcasing works by Virgil Abloh, artistic director of Louis Vuitton’s men’s wear collection. Entrance to the exhibit was by timed ticket only, and tickets sold out quickly. Abloh studied architecture at the Illinois Institute of Technology before he worked in street fashion in Chicago, so it makes sense that his work would also spin off to architecture. Louis Vuitton put on an orange-clad pop-up store in the West Loop where many LV designs by Abloh were painted orange. Nike also hosted an Abloh-themed sneaker sneaker lab on Michigan Ave.

“The Drinker” by Banksy

“The Drinker,” Banksy’s recreation of Rodin’s famous piece “The Thinker,” was “kidnapped” and reclaimed before being stolen again. The sculpture was due to be sold at auction a few weeks ago but was suddenly pulled from auction. Who does this artwork really belong to anyway?

Bradley Cooper and Lady Gaga in a duet

The song from 2018 brought us one of the most talked about Academy Award moments ever — at the 2019 ceremony. The two performed a beautiful rendition that left us with wonderful chills. “Shallow” also took home the Academy Award for Best Original Song.